I have always very much appreciated our troops and our veterans. I believe this is mainly due to the fact that my Grandpa Juni served in the Korean War. He would rarely talk about the war, but when he did he had all of my attention. When hearing him speak of the war, it was easy to tell he carried the things he had experienced in the war for the rest of his life. Some good, some bad, and some really bad.

War can be hell. Our troops carry the things they witness and experience for the rest of their lives. That is a lifelong sacrifice for their country... And that's the sacrifice of those that were lucky enough to make it out alive. John 15:13 says, "Greater love has no one than this, than to lay down one's life for his friends." All of our servicemen and women have known death was a possibility, and they served anyway.

That is amazing. That is service. That is love.

This is no little thing. It is a huge sacrifice. Thank you! And thank you to your families as well. The person going to war or training for war is not the only one sacrificing, their families are as well. Don't forget that!

Because of my upbringing and my beliefs I try to be aware of our serving military, as well as our veterans. I always thank them for their service. I try to strike up conversation with them. I let them know I never served in the military, but my Grandpa was in the Korean War and one of my best friends, Jake, just finished a tour in Afghanistan.

I have never had one troop or veteran not smile or show thanks for my recognition of their service. Many of them will say, "It was my honor." Or, "It was no big deal." Or, "I'm glad I was able to." They show great humility.

I'm sure being recognized and thanked for their service is a breath of fresh air for some of them. There are some people who bash and hate our troops. I can understand opposing and hating war, but try to do it in a way in which the people who were willing to give up their lives are not hurt any more than they already have been. That's messed up.

Go talk to a Vietnam War veteran and you will understand the hurt and pain caused by such words and actions. When these troops, many of them still boys, came home from Vietnam they weren't welcomed home and greeted with thanks or parades. They were greeted with ignored indifference or hateful protests. Many of them were cursed, threatened and sometimes even assaulted.

I can't begin to imagine what they must have been going through. Happy and thankful to be home from war, only to be told or shown by many American citizens that they were unwelcome or hated. Many soldiers tossed their uniforms in the garbage or in the ocean before they came back home in order to avoid being treated in such ways.

I recently spoke to a Vietnam War veteran who experienced some awful receptions when he got back home from the war.

The Saturday before Memorial Day, May 23rd, Jenny and I went to Fargo to celebrate our wedding anniversary. We had a really good time together. We ate some good food, browsed a thrift/antique store, visited a book store, played mini golf, and drove some go karts. But, one of the highlights of the day was when we met a homeless Vietnam vet named Rambo. He told us that his friends call him Rocky.

Rambo/Rocky had quite the story. He had lived a very tough life... and it showed. He was very friendly and enjoyed talking with us. He would say hello to almost every person who walked by his bench. (And there are a lot of people that walk down Broadway in Fargo.)

Jenny and I talked to him for at least an hour, maybe even two. I can't give an exact amount of time, I never looked at my phone to check and I rarely wear a watch. I wonder if Jesus ever checked the sun dial when He was talking to people.

When we are truly serving Jesus nothing is our own any longer, including our time. He is either Lord of all, or He is not Lord at all. And it's not about works. It's about relationship with Him! Day in and day out. Moment by moment.

We asked Rocky if he was sorry for the things he had done. He answered and said, "Of course I'm sorry! I wish I could take them back. I wish that every single day."

I shared a couple of scriptures with him and then he pulled out one of those little pocket Bibles that have the New Testament and Psalms and Proverbs in them. He asked me to show him the scriptures I was talking about. So I did, and we read them together. 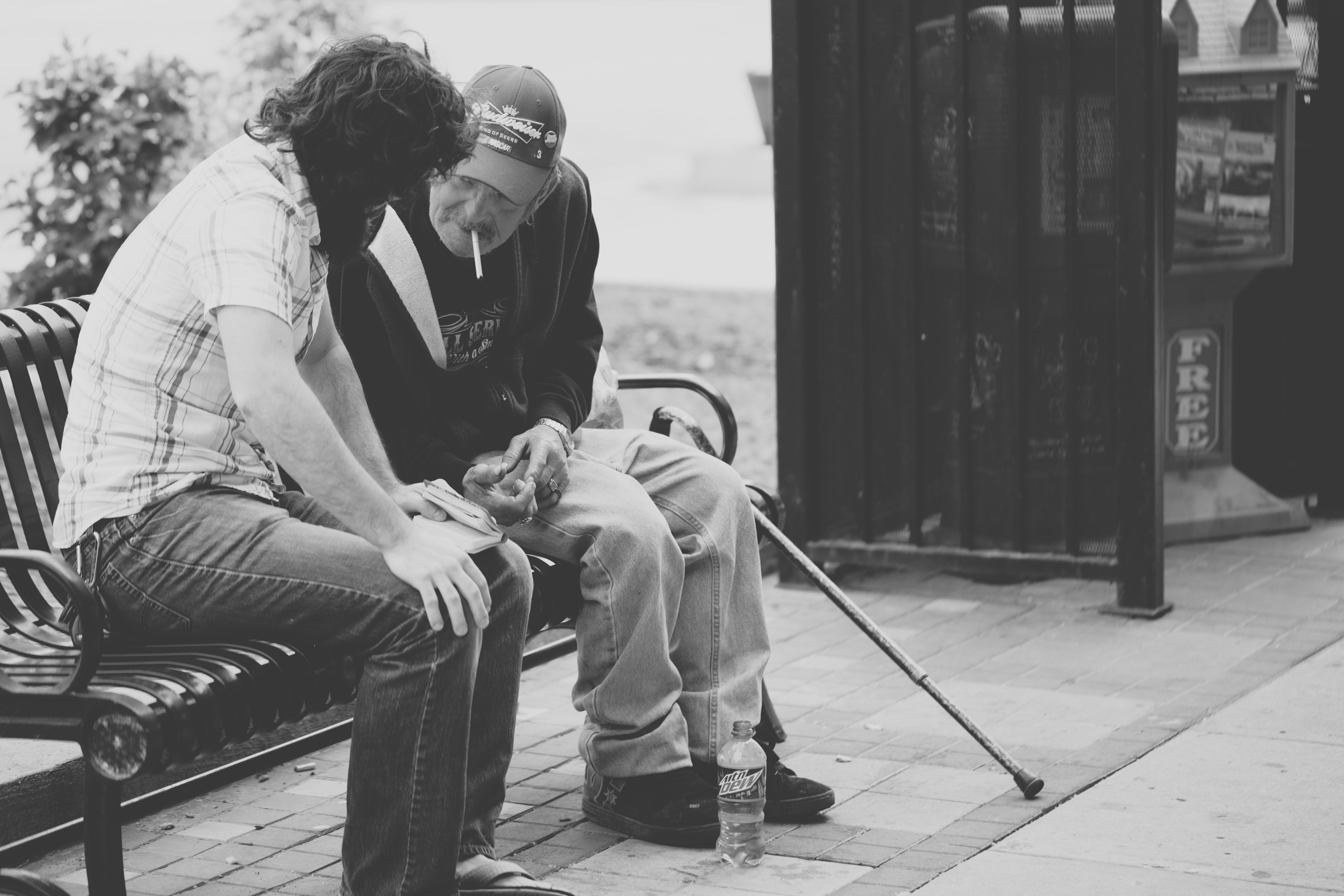 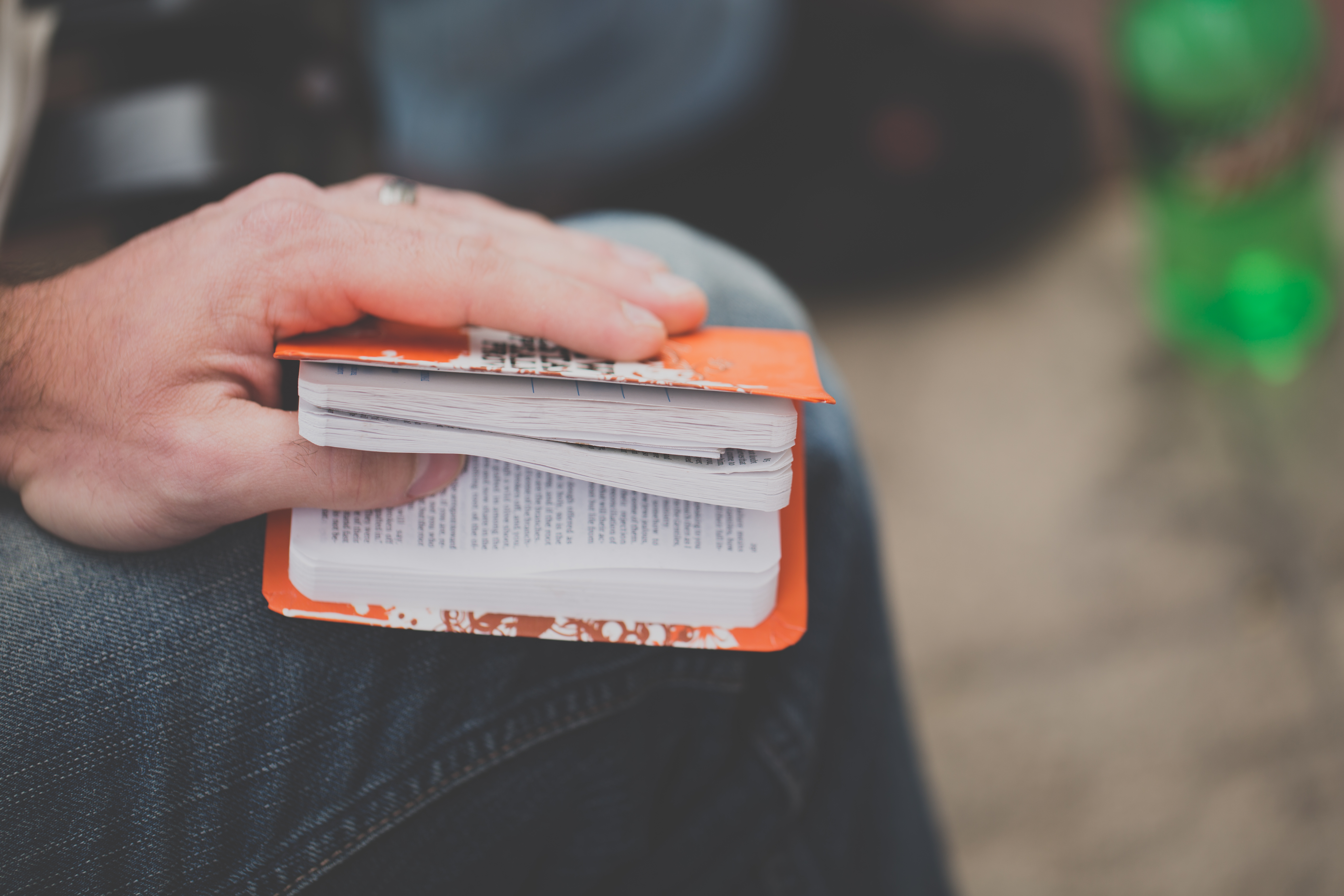 We then looked at Romans 10:9 which says, "that if you confess with your mouth the Lord Jesus and believe in your heart that God has raised Him from the dead, you will be saved."

Rocky truly believed that God raised Jesus from the dead. (He believed the Easter story.) So I let him know that all he needed to do now was confess Jesus as his Lord.

I led him in a prayer and Rambo gave his life to the Lord for the first time. His whole countenance changed when I told him he could know he was going to heaven now. He even double checked with me and asked, "I can have assurance of that?" I answered yes, and Rambo told us he knew it was going to be a good day.

It was a good day, he had just made the most important decision of his life.

While Jenny and I were eating lunch, I had told her I really wanted to talk to someone about Jesus that day. And minutes after we left the restaurant we ran into Rambo, a Vietnam vet with an amazing story who was in desperate need of an awesome God.

While we were talking, Rocky told us his doctor said he will be lucky to be alive through the end of the year.

I'm very thankful Jenny and I were friendly to this man and loved him. I'm glad we took the time out of our day to reach out to someone and thank them for their service to our country... and then serve him in one of the only ways we knew how.

I am very thankful we made time for Rambo on Saturday... even if it did take time away from us celebrating our wedding anniversary.

But now that I think about it, is there a better way to celebrate a wedding anniversary than to love someone and lead them to Jesus?

I don't think so.

Honor a veteran or a troop this week- Don't let our troops and veterans only be thanked one, or two, or three times a year. That's not right.
Talk to someone about Jesus this week! (If you don't think you can do it, ask God for boldness!)
If you already talk to one person a week about Jesus, then talk to two people this week- Jesus was busy doing His Father's business, we should be too. Some of us are so busy doing our own business that we never get around to doing His... It's time to change.