I don't take Donald Trump seriously. In my opinion, he is in this Presidential race for one main thing. Money. The more publicity he gets, the more money he gets. He is either in it for the money, or he is trying to steal Republican votes so it's easier for Hillary to win the election.

That, or he is ACTUALLY running for President. I'm not sure which is scarier, Trump or Hillary as President of the United States.

Anyway, it's hard for me to take Donald Trump seriously as a Republican candidate for POTUS. I have no idea how Republicans, Conservatives, or Christians are supporting such a man as Trump.

Yes, Donald says what he thinks, but so do a lot of old guys... That doesn't make him a good choice for a Presidential candidate.

Do we really want someone that has no filter on his pie hole in charge of one of the most powerful nations in the world?! That seems like it could end up being a problem.

Or as the Bible says in Proverbs 29:11,
"A fool utters all his mind: but a wise man keeps it in till afterwards."

The following are a handful of reasons I believe Donald Trump is a wolf in sheep's clothing and has no qualification to be a Republican candidate for President, let alone our next elected President:


1. Donald Trump dodged the draft for the Vietnam War.

He received 4 student deferments while attending college. He also received medical deferments for bone spurs in his heels after his student deferments were no longer valid. But whenever asked about his medical deferments, he can't seem to keep his story straight. Sometimes the bone spurs were in one foot and other times they were in both feet. I would think most people would remember the medical reason that kept them from going to war, but maybe we just pay more attention to detail than Donald. Here's an article from the Washington Post questioning his draft deferments as well. (click here)


2. Trump has been married 3 times and treats women like garbage.

The fact that he's been married 3 times isn't necessarily the issue, but please continue reading. His first marriage was to Ivana from 1977-1991. This marriage failed because Trump was unfaithful and had an ongoing affair with his soon to be second wife Marla. Marla was 17 years his junior and the marriage lasted from 1993-1999. Trump then married his current wife Melania in 2005. Melania is 24 years his junior. They're still married, so things must be going well.

Of course, if this marriage doesn't work out, he can always date his daughter Ivanka. He joked about incest/dating his daughter on The View in 2006. (click here to watch a clip) Don't worry, that's not the only time he's made those sort of comments. He's made similar comments in an issue of Rolling Stone and on The Howard Stern Show.

So he was a cheating and unfaithful husband and he's also a perverted father.

He flip flops between political parties like crazy. Probably because he flip flops on what he believes on many major issues.

During the 2000 election he was "pro choice in every respect" including partial birth abortion. (click here to watch his interview on Meet the Press in 1999) Partial birth abortion is now illegal, but back in 1999 he was all for it. Now he says he is pro life, but there should still be exceptions in cases of rape, incest, or the life of the mother. He is still a supporter of Planned Parenthood.

He wanted universal healthcare. (click here for the transcript from his Larry King interview) But, now he thinks Obamacare is a complete failure and disaster.

He supported a 14.25% one time tax on the wealthy. (click here for the CNN article)

At one time he wanted to legalize drugs. (click here for the Chicago Tribune article) 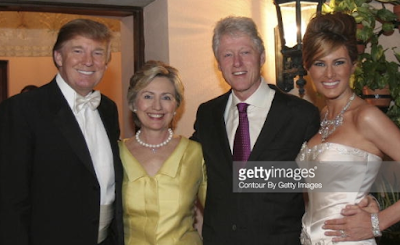 The Bible says where your treasure is your heart is. (Matthew 6:21, Luke 12:34) It seems Donald's heart is with the Clintons and Democrats, and it has been for many years. He's given to Hillary's campaign as recently as in 2007 and has given money to the Clinton Foundation as well. The Clintons even attended his most recent wedding in 2005. He has given money towards the campaigns of Harry Reid, Nancy Pelosi, and John Kerry just to name a few. Since 2012 he has given solely to Republicans. Another flip flop for Trump.

That's like a little kid saying they love something and then when you ask them more about it, they get caught in a lie and don't know what to say. Backpedaling like crazy.

Trump's PR people may have the hardest job in the world. God help them!

The Bible is his favorite, but he doesn't want to be specific about his favorite verse... Apparently his favorite verse isn't about sharing the Gospel/Jesus with others! Maybe Trump hasn't yet read Jesus' words about not hiding our light under a bushel basket. (Matthew 5:15, Luke 11:33)

In Iowa in June Trump said that he has never asked God for forgiveness and described communion as, "When I drink my little wine, which is about the only wine I drink, and have my little cracker."

And when asked about attending church, Trump said he goes to church, "As much as I can. Always on Christmas. Always on Easter. Always when there's a major occasion. And during the Sundays. I'm a Sunday church person. I'll go when I can.”

I don't need my next President to be a theologian, pastor, or Bible school graduate (although that would be great) ... but come on. It's like he's not even trying! But, why should he try harder when Christians are already falling for his show so easily? It seems like Donald's Christianity is more for show than anything.

Or as Jesus said in Matthew 15:8-9,
"These people draw near to Me with their mouth, And honor Me with their lips, But their heart is far from Me. And in vain they worship Me, Teaching as doctrines the commandments of men."


So to briefly summarize, Donald Trump is mostly all, if not all, talk. And when he talks, which is all the time, he either makes no sense or just says the most outlandish offensive stuff he can think of.

He is not a Republican. He is definitely not Conservative.

He was a war dodger. He supports gay marriage. He supports abortion. He supports the funding of Planned Parenthood. He has been a womanizer, treats women like garbage, and says horrible things about them. He supported universal healthcare in the past. He has given money to all kinds of Democrats, including the Clintons.

In no way is he Presidential material. And judging by his fruit (which we are told to do) ... IF he is a Christian, he's definitely a baby one.

Matthew 7:20 says,
"Therefore by their fruits you will know them."

These are just A FEW of the glaring inconsistencies and outrageous things about Trump that really jump out at me. I won't go into further detail on any other Trump topics in this post.

Trump is a man that needs Jesus, just like all of us. But, it's pretty apparent he doesn't know Him intimately. (Or at least not as intimately as he is desperately trying to convince us of.) In no way, shape, or form is he fit to be the next President of the United States. Wake up Christians and Republicans alike! Please!

Thanks for reading, and please pray for our country's current and future leaders!