Saturday morning after breakfast we headed to the graduation for the APEPT Bible School students. It was an enjoyable ceremony and there were many people in attendance. Del spoke and so did Pastor James since he was the principal of the school. The ceremony was interspersed with others speaking and with many praise and worship songs as well. This also included a song from Peter's daughter Esther Liana that was pretty cool! Apparently she is somewhat famous in Kenya. She has some music videos on YouTube and is a judge/ mentor for an American Idol type show called Talanta Awards. She is a very good singer and had the whole crowd involved that's for sure!

After the ceremony we got pictures with many of the students and we were invited to Peter's house. When we pulled up his whole family was outside cheering and celebrating. His 116 year old mother was even there and she was dancing a little bit! It was very special. All of the people in the surrounding houses came outside and watched as we celebrated Peter and his family worshipped the Lord, so that was pretty cool! 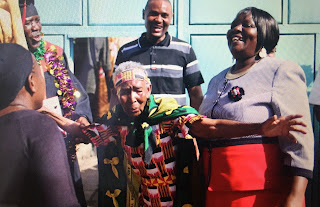 There was a large feast inside awaiting us. There was chicken, chapati (similar to tortillas), two kinds of rice, cabbage, some sort of brown beans, and a large pot of stew that was very good. It had carrots, potatoes, goat meat and squash or zucchini of some kind. We were joined by James and his daughter as well as a Bishop from Uganda named Daniel that is good friends with Peter. Daniel had just gotten back from doing missions in Dubai, and had a layover in Nairobi. Later the following day, Peter told us that Daniel has planted over 21 churches and is in charge of 250 churches in Uganda! Wow!! 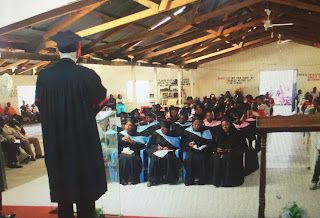 Daniel told us about his experience with missions in Dubai and the 7 Emirates. He said they allow you to have services in private places, but you can't effect the outside or the public. So there are no open air meetings or anything like that. But, once the people come into the church building, you can peach the Gospel and tell people about Jesus. By people coming in to a church building, they are agreeing with what you stand for. He said they are very hungry people, and that many Muslims are coming to know the Lord. Many of them have been seeing visions and have been meeting Jesus, so they are ready to hear the Good News of the Gospel! We enjoyed our time at Peter's and then we headed back home.

When we got back to the house there were kids playing soccer in the courtyard, so I joined them. A few kids and I played for awhile and then a few adults came out and played as well. It was a lot of fun! We played keep a way from the kids and passed the ball around for awhile, but after about 15 minutes we decided to play a full game. There were four of us adults and then two younger boys. The guy on my team and I worked really well together. We scored quite a few goals and only let in a few. At one point I heard one guy say to another, "This guy is unstoppable." Haha! So that made me feel pretty good. I was definitely tired out after playing though. Running with Kenyans is tough!

Sunday morning after breakfast we all split up and went to different church services. Ken went to Josiah's church. James went to Peter's church. Jackie and Vonda went to Eunice's church. Del went to James' church, and I went to the church right by James' church with Pastor Shadrack and Pastor Fidelis. Our service went really well. We had worship and then I taught on Our Determined Purpose for the Bible study. It was received well. 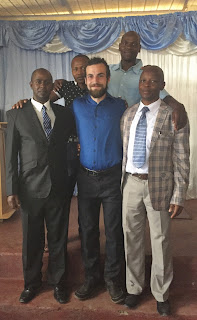 We then had some testimonies and some more praise and worship. The time of worship was very powerful, and after worship I let the Holy Spirit minister to the people and I prayed for them. I prayed for healing for over a dozen people and then prayed for finances and a restoring of relationships for another dozen or so. It was really good. Different, but good. I wanted to be led and be obedient, so that's what I did. After that time I taught on Enduring and not losing heart or losing hope. It went very well and was received by the church. We started at 10am and got done just after 1:30. They are hungry for the Lord that's for sure! 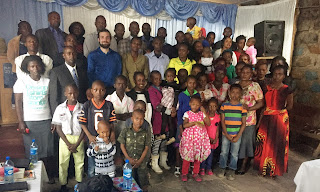 After church we headed back to the house for lunch and also started preparing for dinner. James cooked two chickens, roasted carrots and potatoes, made rice, cabbage, raw tomatoes and onions in a vinaigrette, and we also had watermelon. It was a lot of food and it was all very good. While we were cooking it actually rained for about an hour! It was neat hearing the neighbors laughing and enjoying the rain.

Peter, James, Josiah and Josiah's wife Josefine all came to the house and we enjoyed dinner together and had good conversation. It was a great time of fellowship. I definitely feel connected to all three of these men. It is nice getting to know them more and more and seeing their hearts for the Lord. It was a very enjoyable evening! 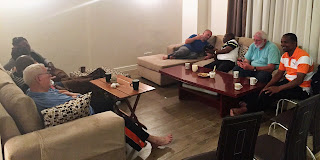 Monday morning Del left for Zambia. He will be spending about a week there teaching pastors and leaders. We also had a visitor Monday morning at our house. James Miller has a friend from western Kenya that he has ministered with before on a past missions trip. His friend, Pastor Richard, rode a bus all night to come to Nairobi. It is about an 8 hour bus drive each way. He came all that way to connect with us and to pick up the remaining Bibles we had brought. We were able to give him just over 50 Bibles. He wanted 50 Bibles because he is a leader of 400 pastors in western Kenya and he wants to start a Bible school there. Amazing! I think I'm busy with my church... I can't even imagine how busy and how much work that would be! 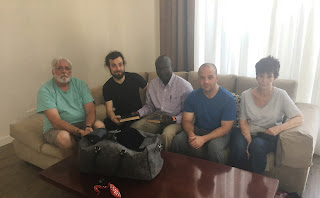 That was our weekend and Monday morning. It was very full and very enjoyable. It has definitely been a blessing being in Kenya!